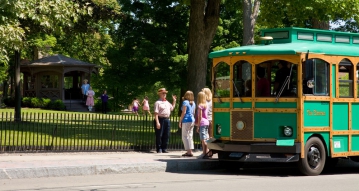 Welcome to Chemung County, where you can explore the many facets of a rich and vibrant community steeped in magnificent history and charm. Chemung County is not only the southern gateway to Finger Lakes Wine Country, New York’s largest wine-producing region, lauded for its breathtaking vistas and award-winning wines, but it has a fascinating story all its own. In the Algonquin language, Chemung means “place of the horn," in homage to a time when the Native Americans would discover large mammoth tusks along what is now the Chemung River.

Woodlawn National Cemetery stands as a tribute to soldiers who died at the infamous prison camp that was in Elmira during the Civil War; while a harrowing chapter of local history, it is deservedly commemorated at the cemetery, which has the distinction of being the northernmost Confederate monument in the United States.

The area is well-noted for its riveting ties to military history. Newtown Battlefield, a national historic landmark, was the site of a significant offensive clash in the Sullivan-Clinton Campaign of the American Revolution.

Elmira’s significance also comes from holding the revered title of National Soaring Capital of America. Harris Hill, internationally known for its spectacular thermals, is home to the National Soaring Museum, which houses the world’s largest sailplane collection. Glider rides on Harris Hill are a thrilling experience not to be missed. Elmira has been home to many heroes and pioneers, including; Ernie Davis, the first African-American to win the Heisman Trophy; astronaut Eileen Collins, the first woman to pilot a space shuttle; fashion icon Tommy Hilfiger; NBC news anchor Brian Williams; and Hollywood producer Hal Roach of Laurel & Hardy and The Little Rascals Fame.

Its most famous resident, however, was American author Mark Twain. Twain married Olivia Langdon, a woman from a prominent local family, and they summered here for more than twenty years. He wrote his most famous works, including The Adventures of Tom Sawyer and Adventures of Huckleberry Finn, in his study at Quarry Farm on East Hill, which overlooked the majestic Chemung Valley. The view, with its rolling green hills punctuated by the serpentine Chemung River, was said to have served as a great inspiration to his writings.

Twain, who died in 1910, was buried in Elmira alongside his beloved wife and children, and his memory is honored throughout the year by visitors to his gravesite in Woodlawn Cemetery.

Twain’s study can be found today on the beautiful Elmira College campus, which was the first institution in the U.S. to grant women collegiate degrees equal to those of men. The study has been deemed the “#1 Literary Attraction in America” by USA Today and the college, home to the Center for Mark Twain Studies, also features an exhibit of Twain artifacts related to his time here. So enjoy your stay in Mark Twain Country, where we’re not only Proud To Be Where Twain Remains, but proud of the plethora of arts, culture, accommodations, shopping, cuisine, festivals, and outdoor adventures that make Chemung County an incredible place to visit and live.