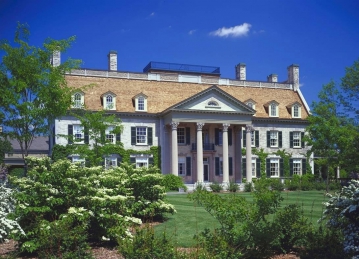 The George Eastman Museum is located in Rochester, New York, on the estate of George Eastman, the pioneer of popular photography and motion picture film. Founded in 1947 as an independent nonprofit institution, it is the world’s oldest photography museum and one of the oldest film archives. The museum holds unparalleled collections—encompassing several million objects—in the fields of photography, cinema, and photographic and cinematographic technology, and photographically illustrated books. The institution is also a longtime leader in film preservation and photographic conservation.

There is always something new and different to engage, educate, or entertain you at the Eastman Museum:

At all times, at least three temporary exhibitions on photography and cinema—most of which change about every four months—in the main exhibition galleries, the Project Gallery for contemporary works, the History of Photography Gallery, and on the second floor of the mansion

George Eastman’s historic mansion and gardens, where one can see how this visionary entrepreneur and philanthropist lived for almost thirty years during the early twentieth century—one of only two National Historic Landmarks in Monroe County

The beautiful 500-seat Dryden Theatre, which exhibits more than 300 different films every year and, as one of just a few venues in the world equipped to exhibit highly flammable nitrate film, hosts the annual Nitrate Picture Show—A Festival of Film Conservation

Several times a day, docent tours of the exhibition galleries, mansion, and gardens

Frequent talks by in-house experts and visiting artists and scholars

Music recitals in the mansion almost every Sunday afternoon at 3 p.m.

A leading library of literature on photography and cinema in the world, accessible by appointment

Films at the Dyrden Theatre nightly with Senior Matinees on Monday.